"I think you need a little time with my belt," Eric said, looking at me from across the table at Denny's.  I had just informed him the auto repair bill for an oil change and two light bulbs was over $600 because I had agreed to an intermediate service even though he specifically told me I could wait on it.  He wasn't mad about the money so much as he felt the dealer had taken advantage of me and that I hadn't listened to him.

I took one of his pancakes and ripped it into a heart shape before meeting his eyes with mine.  My utter glee could not be hidden. A huge grin, especially when I'm in trouble, is pretty much a dead give-away that I've got something up my sleeve.

"Okay!" I said with far too much joy.

Eric looked confused so I reached into my purse and pulled out a birthday card.

He smiled and shook his head, suddenly putting the pieces together - a heart shaped pancake (birthday tradition), a giddy wife who would normally be kicking herself for the car thing and three hours blocked out of the work day for no apparent reason.

"Thank you, Sweetheart." Eric said.  He looked so handsome while reading my heartfelt love letter.  A fresh new haircut, those brilliant blue eyes that reach into my soul and a genuine appreciation for the time I took to write him.

"Very nice." He reached forward and those hands I long for brushed across my arm until his fingers rested in mine and squeezed tight.  "Now I have two reasons to spank you," he whispered and winked.

I was so excited I thought I would pop right out of the booth.  I quickly pulled my hand away and grabbed a second card from my purse.  This one had a gift card in it for $55, one for each year of his life.  We both laughed at the name on the card, "Vanilla Visa".  Not my guy!

After breakfast we headed home, light and flirty conversation, the rest of the world nonexistent.

Not two minutes inside, Eric put on his HOH voice.  "Upstairs young lady!  You're getting the belt today."

I was ecstatic.  Eric keeps his thick black belt hanging in our closet, both a convenience and a reminder to me as we dress each day, and I had hidden his giant birthday gift in that closet. I couldn't have planned it any better.  He opened the door, grabbed the belt and walked into our bedroom.  There was no reaction nor mention of the present.

"Over the bed!" he commanded and I deflated, crushed that he hadn't see that large green and blue wrapped present taking up the entire center of the closet.  Eric broke out laughing and hugged me tight.

"I saw it," he admitted playfully tossing his belt on the spanking chair and sitting on a bench at the foot of our bed.  "Bring it to me," he said, now joining in the excitement and looking just like a kid at Christmas. 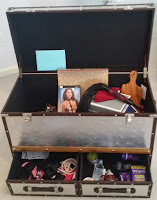 I struggled to get that heavy thing out and into the room, but it was so worth it. A few nights earlier, I had been running errands and came across a storage chest with two drawers.  Eric's been saying we need something to keep our toys (spanking implements, sex toys, etc.) in, as my old boot box is starting to tear and overflow. His eyes absolutely lit up when he saw the chest.  He immediately opened the main compartment (Where he found another gift - the flogger!  Also, we want to try a little bondage so I got a deck of how-to cards, a collar/cuff set and lovers tape.) and the drawers.  We pulled out all of our paraphernalia and went about arranging everything.

Well, you seriously cannot have all that stuff out and not use it!  Suffice to say, we had a blast.  I did get spanked with his belt for the auto dealer faux pas.  I also took 55 birthday spankings with the hair brush.  Believe it or not, I suggested we try out the flogger; okay, I suggested I try it out on him.  Guess what?  That got me 55 more! (Though he did let me "show" him ONE time what it felt like.)  And somewhere, in between all that spanking, I got a pearl necklace from a very satisfied birthday boy.  He even drew a heart on me with a sharpie.  Ahhh.  I love that man.

By 2 pm I was sitting in my office, buns on fire, head lost in the clouds.
Such a fun day.
Happy Birthday, Eric!!
Amy